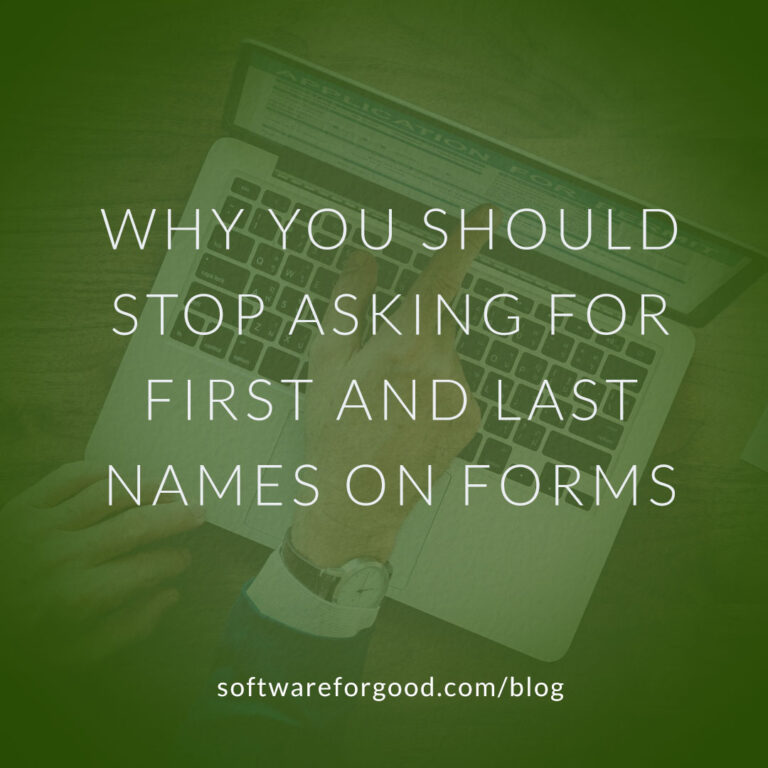 Entering your name (or your child’s name) in online forms is part of everyday life on the internet — and those forms often separate “First Name” and “Last Name.” We’ve realized, however, that that doesn’t include everyone, and have been encouraging our clients to switch to a single “Name” form.

The reason is simple: Not everyone has a first and last name.

Many cultures and parts of the world don’t think about first and last names in the traditional Western sense. Copy editor Emmy J. Favilla shares a few examples in her book A World Without “Whom”: The Essential Guide to Language in the BuzzFeed Age:

∙ Some cultures don’t use a family name, but may use names based on geography, social standing, or other factors.

∙ Latinx surnames often include both paternal and maternal family names.
(Side note: The word Latinx is increasingly used as a gender-neutral alternative to Latino/a — another example of how language conventions can shift to be more inclusive.)

Our senior engineer Kevin Bullock’s favorite resource for this is a 2010 blog post called “Falsehoods Programmers Believe About Names” by Patrick McKenzie. The post challenges false assumptions including:

∙ People have exactly one full name which they go by.

∙ People’s names sometimes have prefixes or suffixes, but you can safely ignore those.

∙ Two different systems containing data about the same person will use the same name for that person.

Yeah… we can’t necessarily assume any of that.

A separate but related issue: People can have characters as part of their names that aren’t used in English. UX and UI designer Stéphanie Walter makes the issue clear in her blog post that starts, “Hello, my name is Stéphanie. But some of you call me St�phanie, St?phanie, St&#234;phanie or StÃ©phanie.” She describes filling out web forms only to see error messages like “First name is invalid” — an alienating thing to read about your own name.

And that’s really the heart of this issue. Forcing people to fit their names to a certain convention will not only result in inaccurate and/or inconsistent information in your system, but also create a frustrating experience for the user.

If a person can’t put their name in your system, they might decide not to sign up for whatever you’re offering — or just start their relationship with you feeling left out.

So the next time you’re building a web form, try skipping “First/Last” in favor of a field that welcomes everyone’s name.