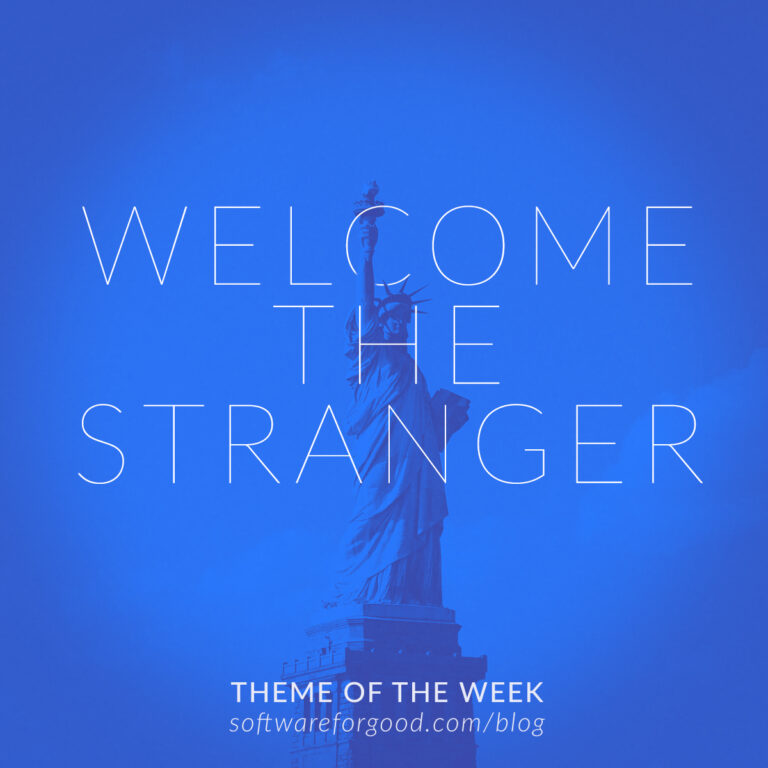 It’s a topic and commandment found in nearly every faith tradition—including the Abrahamic traditions of Christianity, Judaism, and Islam. (We don’t often talk about our faith on this blog, but I’m proud to say we’re a diverse bunch at Software for Good, from staunch atheists to deeply reflective Christians).

Historically, the United States has always been divided on this issue. On the one hand, we’re a country that was founded on genocide and slavery that continues to struggle with very real and very large structural inequalities across race and gender and class lines. On the other hand, we literally have a giant statue with the following words on it:

Give me your tired, your poor,
Your huddled masses yearning to breathe free,
The wretched refuse of your teeming shore.
Send these, the homeless, tempest-tossed, to me:
I lift my lamp beside the golden door.

The better angels of this country have always pushed us towards inclusion, not exclusion. Towards equality and opportunity, not intractable disparities and poverty.

It is true that America has never been great. That its greatness is a mythology that can distract us from its militarism, its segregation, its fugitive slave patrols, and its Matthew Shepards. But it is also true that there have always been Americans working to make America what America could be. As Langston Hughes put it:

O, let America be America again—
The land that never has been yet—
And yet must be—the land where every man is free.
The land that’s mine—the poor man’s, Indian’s, Negro’s, ME—
Who made America,
Whose sweat and blood, whose faith and pain,
Whose hand at the foundry, whose plow in the rain,
Must bring back our mighty dream again.

On Sunday, I was proud to stand with one thousand Minnesotans arguing against the ban affecting primarily Muslims and especially refugees. I was proud that my coworkers here supported my actions. At this time when parts of our country want to build walls and lock people out, I want to build bridges and welcome them to my table. Many of my fellow Minnesotans came here as Somali refugees. They enrich our city and state, they make my world broader, they make my dreams richer.

And so, this week’s theme: Welcome The Stranger.

I would like to suggest this not only in regards to people, but ideas as well. I realize for many of the people reading this, opposing Trump’s latest executive order is preaching to the choir. However, I am certain there are ideas that feel strange to you. Maybe especially some of the ideas of the Trump supporters you know.

I am emphatically not someone who thinks we can all just sit down and talk to each other and fix our problems. I am less interested in breaking bread with Trump voters than figuring out effective ways to limit the very real harms of this administration. However, I would like to suggest that we can consider all ideas, even repugnant ones, without fear or hate, and then reject the bad ones from a place of principle and recognition that even our opponents are humans.

So I challenge you this week to find a way to welcome in something that feels strange to you. To give it a space at your table, to offer it food and drink and a warm bed.

Perhaps that is a person who is given a place at your table by donating money to an organization helping out with the ongoing humanitarian crisis in Syria and the Mediterranean. Perhaps it is an idea that you engage with before dismissing. Perhaps it is a welcoming through action—putting your body on the line in a visible way that shows Muslims and refugees worldwide that you are willing to welcome them. Perhaps, dear tech blog readers, it is even just through giving a past coder the benefit of the doubt with the development choices they made and not automatically assuming they were stupid.

Lastly, I’d like to suggest you make time to watch this award-winning short documentary that follows one day in the life of a Greek coast guard worker as he works to save refugee after refugee—people who are trying to find safety for themselves and their families.