I was so thrilled to spend this past weekend as a student at RailsBridge, a free Ruby on Rails workshop designed to increase diversity in tech. Run entirely by volunteers, this weekend’s Twin Cities RailsBridge introduced dozens of experienced mentors to dozens of eager students for a day and a half of nearly 1-on-1 programming lessons.

Big thanks to mentor Jared Mehle for the photo.

Before this past weekend, I didn’t really have too much exposure to Ruby on Rails. I’d been working my way through Codecademy lessons, and I’d met a few times with a local “let’s teach ourselves to code” group. Actually, my best preparation was the fact that I’d been overhearing Ruby vocab words like “gems” and “arrays” and “migrations” and “hashes” and “shitshitshitshitshit” since my very first day at Software for Good. Never underestimate the amount you can learn just from sharing an office with a bunch of developers.

RailsBridge encourages students to jump right in, and the curriculum’s introductory lesson walked us through the process of building a web application. The curriculum was super approachable, and it certainly helped to have so many mentors available for questions. It was so cool to watch my code come to life—to make a push to Heroku (but not before committing to Git) and then see my changes up on the web.

Not So Fast, English Major

I knew I had a lot of technical concepts to grasp, but I wasn’t expecting that my English major background would be the world’s most obnoxious double-edged sword. I could chat for days about the importance of clear communication and the benefits of having strong writers on every team, but I won’t. Instead, I’ll just whine about that one time at RailsBridge when I spent a solid five minutes staring at this code and wishing I could just move those stupid little commas inside of those stupid little quotation marks.

Or that one time at RailsBridge when I hit a stupid roadblock because I legitimately had to consult a few different dictionaries to check if the plural of kiwi is, in fact, kiwis. 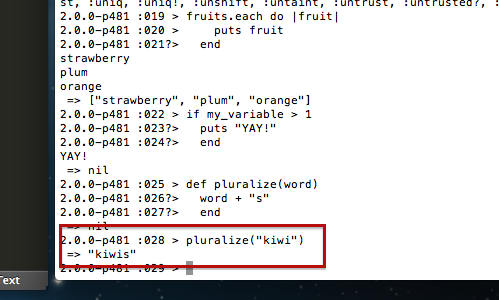 Enormous thanks to the entire RailsBridge community and to the local folks who helped out in Minneapolis this past weekend. It was a fantastic event with so many great mentors and great lessons and great food. Also, thanks to the Minnesota Population Center for letting us crash in your offices for the weekend. It was one I’ll never forget, and I’m so excited to join the intermediate RailsBridge track on the next go-around.