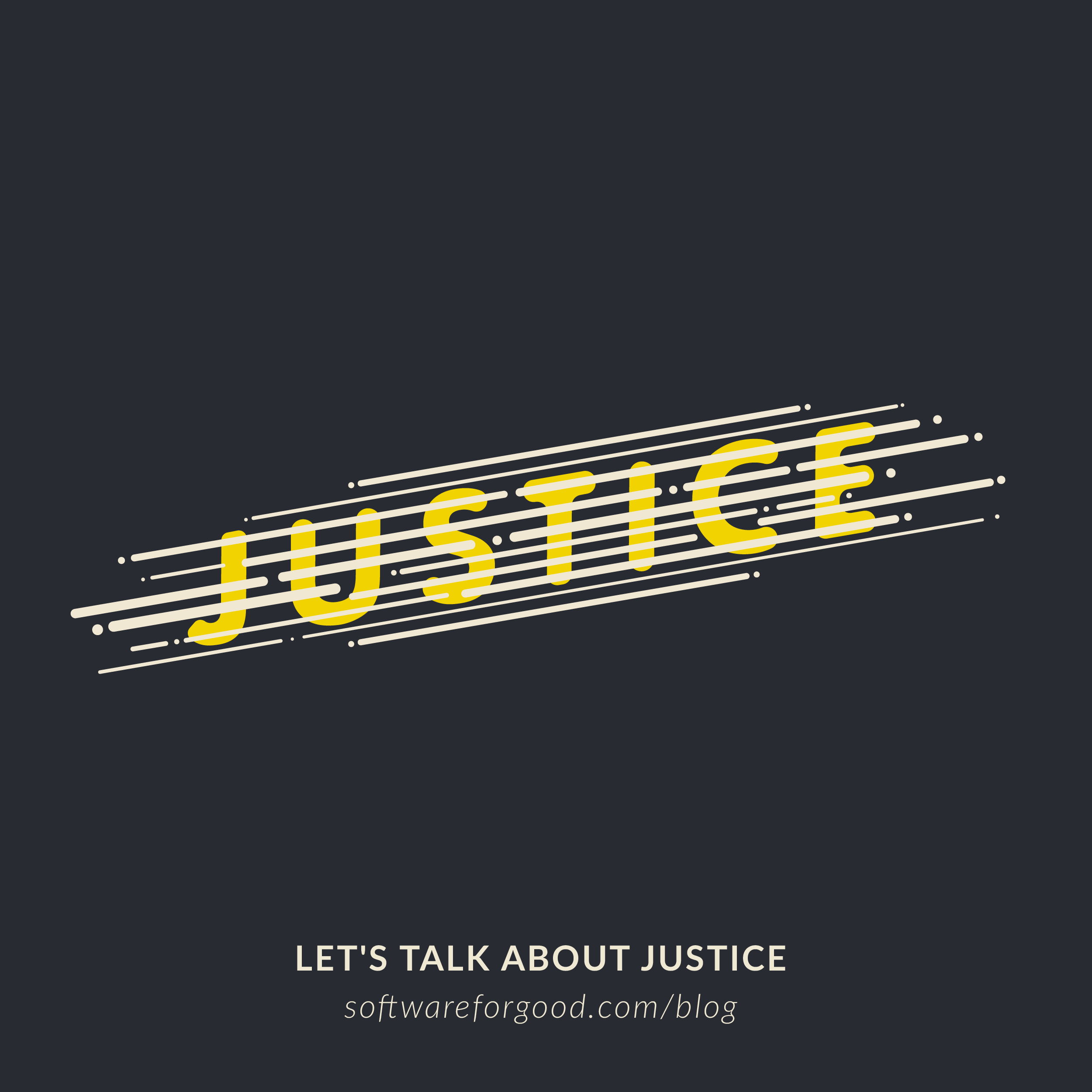 Before I became a programmer, I spent about a decade doing racial justice as both a policy researcher and working in inner-city communities of color running programs for youth. Doing this work, I often found myself pushing back against (well-meaning) dominant frameworks of thought that understood racism to be only about overt acts done with malicious or prejudicial intent. However, if we want to talk about racial disparities and their persistence in the United States, we need to examine the structures that reproduce those disparities in complex and interconnected ways. Those disparities continue to be perpetuated despite positive changes in racial tolerance and inclusion. Racism is the whole system, not just a violent act or a prejudicial attitude. As well, I was often faced with people that wanted to talk about multiculturalism or diversity without talking about white privilege and structural power inequalities.

I want to talk about social justice because I want us to be building socially just organizations that are building products that help dismantle male privilege, white privilege, economic privilege, and provide more opportunities for flourishing and freedom for everyone. I want our workplaces to be places of radical experimentation with decision-making structures, places where we try different strategies for eradicating power-over relationships while we work together to build things that are addressing the Big Issues looming over us in the 21st Century. I want our workplaces to be safe spaces for everyone, places where abilities are nurtured and mentored and no one feels pushed aside at the end of the day.

I don’t think we have mainly a diversity problem, in tech or in our society, we have a justice problem. Our diversity issues are a sign-post pointing to issues of oppression in our field, in our countries, and within the global economy.

That’s not to say our lack of diversity isn’t causing it’s own problems. It’s part of the problem. Creating more diverse companies (and conferences, and standards panels, etc) should be a tool in our toolbox for creating a more socially just world. More diverse workplaces will lead to better and safer workplaces for marginalized people. More diverse teams will build better products and notice issues that less diverse teams wouldn’t. More diverse organizers will choose talks more relevant to more people. More diverse companies will prioritize different products to build. Etc. Luckily you don’t have to choose whether you want to work for diversity or social justice, you have to work for both to make it work.

So in the interest of using a social justice frame, here’s 5 things we should be talking about:

1) It’s not just a pipeline problem

Often, discussions about having more diversity in tech come down to talk about the pipeline. And we do need to improve the pipeline. But it doesn’t matter how many women and people of color we recruit into tech, if exclusionary practices and overt misogyny and racism force them out. The pipeline problem is also a retention problem. And too often talk about the pipeline ignores what we can do here and now to create more equitable organizations.

2) It’s not just a women-in-tech problem

Women are under-represented in tech. But people of color are /more/ under-represented in tech. To even talk about this requires talking about patterns of segregation in our cities that create underfunded schools and areas cut off from opportunity. Talking about how we fund public schools. Talking about discriminatory hiring practices. Etc. But let’s not congratulate ourselves about finally having lines at the women’s bathroom at tech conferences, when we aren’t even hiring the people of color that are graduating from tech programs.

I believe that if you have privilege, you have a specific responsibility to understand the structures that give you those privileges. Mostly this involves listening to or reading people that don’t have those privileges that understand how the game is rigged. On a macro level, you need to be working on structural issues that give others access to the same opportunities you have had. On the micro level, you have a specific responsibility to be present in calling out problematic behaviors in the privileged groups you are a part of. If you are a cis guy, don’t depend on the female-identified people in the room to always call out problematic statements, be there first, and be there with some humility and integrity in acknowledging you too have said/done sexist things.

Expect to make mistakes in this work. Show up anyway. Mistakes in being an ally are as much a part of the process as bugs are in programming. With each mistake, you have an opportunity to look deeper into the problems in our collective source code.

4) Most people in tech have economic privilege

In 2013, the median household income in the United States was $51,939 and over 75% of all people made less than $50k a year. Chances are, if you are working in the tech industry, especially as a developer, you are even making more than the average African-American with a Ph.D. who earns about $62,000/year. If you are making more than $100k a year (and some of you reading this are), you’re in about the top 7% of income in the U.S. (and, of course, you’re beyond rich when compared with the rest of the world).

So, two things. First, decide what you’re going to do with some of your surplus income. Consider giving it to underfunded organizations working on issues you are passionate about. But perhaps more importantly, question it. Why this is the case? Why does our socioeconomic system value telling a computer what to do more than it values teaching children, taking care of the homeless, or serving food? Question it within your organization as well — are your coders valued more than your designers? Is that gendered? Are your managers adding “more value” than your intern? Don’t accept massive wage and wealth inequalities as natural or neutral.

It honestly doesn’t matter to me how transparent and diverse your organization is if you are just tech mercenaries for hire or building a product that hurts people. Technology is a double-edged sword, and can be used to reinforce current power structures even more easily than it can be used to dismantle them. Question what sorts of products you are helping to produce. Question how those products will be used within larger socioeconomic systems. Make things that make the world a better place. Make things that are addressing the deep problems. Question whether you know what those things are. Question the questions. Listen more.

Keep working for a more socially just world and diversity will bloom. Because diversity is already here, the world is more diverse than you can imagine. It’s oppression that creates monocultures.