In the Hot Seat: My First User Test 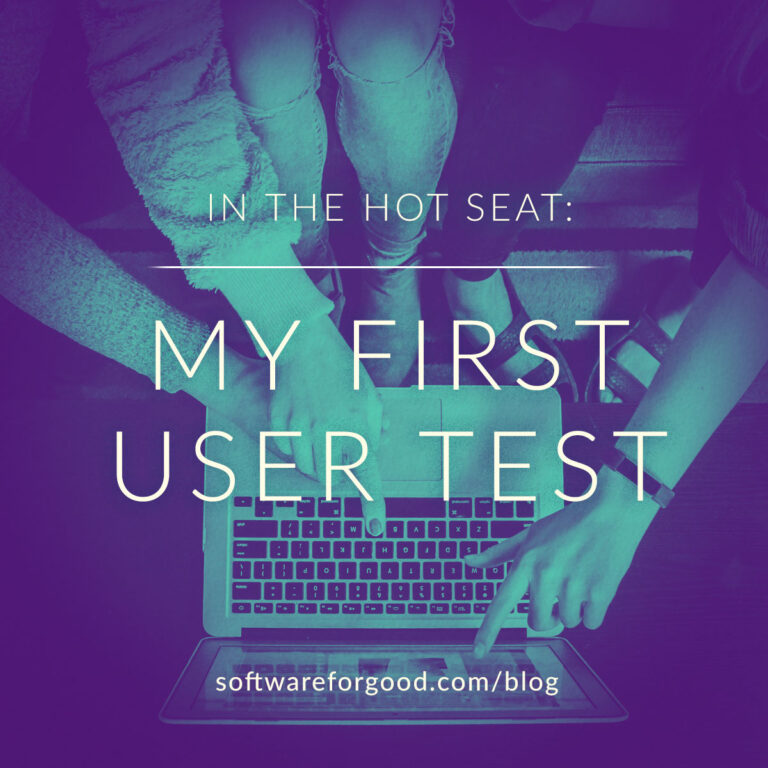 “Testing one user is 100 percent better than testing none.”

That’s one of Steve Krug’s mantras in his book Don’t Make Me Think: A Common Sense Approach to Web Usability, a user-friendly introduction to making websites easier for people to navigate and understand. He emphasizes that while there are some general usability principles, it’s most important to ask the users themselves.

I read Krug’s book for the first time earlier this year, so I was excited to see that a usability lab would be part of Geo:Code, which took place March 24-25. This conference and civic hackathon, for which Software for Good was a promotional sponsor, focused on using open government data for good. Throughout the weekend, teams worked on tech ideas to improve local government and benefit Hennepin County residents, and could submit their in-progress projects to the usability lab for testing.

I spent most of my time at Geo:Code attending conference sessions like “Introduction to Usability Testing” by Amy Hoey from Hennepin County and Amy Luedtke from Hennepin County Library. They explained how they’ve done testing for the county and library websites, and had a colleague do a live user test in front of the audience. I eagerly scribbled notes like “Challenge assumptions about users” and “Testing with 5 people reveals 85% of issues,” not knowing I would end up in the user hot seat myself by the end of the weekend.

But as the project teams were hurrying to finish their prototypes, I wandered over to the usability lab and was recruited. I would be testing a project by Team O.G. (short for open government) on voter turnout data.

I sat in a small room in front of a desktop computer and a rig called Mr. Tappy, which allows for a user’s-eye view of mobile devices and other handheld items. The facilitator placed paper mockups of the site under Mr. Tappy’s lens and asked me questions about what I noticed about each page, where I would look for certain information, and what I would expect to happen when clicking various links. Then I shifted to the desktop computer to walk through a few more tasks and questions on the staging site. I narrated my reactions and decisions into a microphone; in the next room, the project team and other observers could hear me and see the mockups and screens I was looking at.

Although the facilitator explained upfront, “We’re testing the website, not you,” I was nervous about saying something clueless, or not knowing what to say at all. As I began looking at the site, though, I realized that I did have plenty to say — not because of any expertise about web design or UX, but simply because I use the Internet every day. When I’m shown a new website and told what to look for, I do have instincts and questions. Having attended the presentation on usability the day before, I also knew that saying things like, “Hmm, I don’t know what this icon means” or “I would go to this menu to find that” would be helpful.

When I rejoined the observers at the end of the test, it was interesting to hear the project team talk about what they’d learned and what they planned to change. For example, I had stumbled over the word “subdivision” within the voter turnout data, not knowing it referred to cities and municipalities. The team discussed renaming it, but also suggested that typical users of the site would know “subdivisions” and might prefer the specific word.

Less than two hours later, the team unveiled their project in the final presentation that closed out the weekend. It was exciting to see the immediate payoff of the user test — they’d made a couple of the changes that had come up, and mentioned others they hoped to make in the future.

I haven’t yet been part of user testing for any of the products or websites we’ve developed at Software for Good, as I’m new to the team. But getting to be the guinea pig at Geo:Code showed me how valuable testing is, even with just one user.