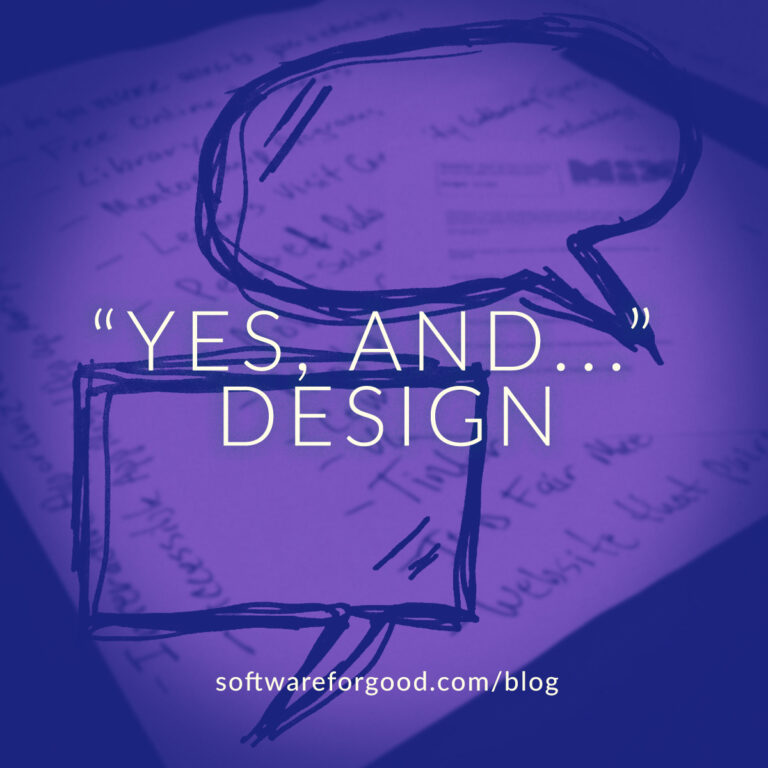 This is part two of a series on Software for Good’s participation in the 2017 Minneapolis Idea eXchange. Read Liz Tupper’s insights from participating in the night’s keynote panel here.

MiX—the Minneapolis Idea eXchange—is part of the Minneapolis Downtown Council’s Intersections: Downtown 2025 plan. In partnership with the Brave New Workshop, they brought together five contributors to the non-profit and for-profit sectors with a mutual interest in community improvement.

My Intro to Improv

Elena Imaretska, Chief Innovation Officer for Brave New Workshop, began the evening’s program with an intro to improv. She had three assumptions for us to keep in mind during the exercise:

You will be successful.
Your job is to support and celebrate.
You will have fun. 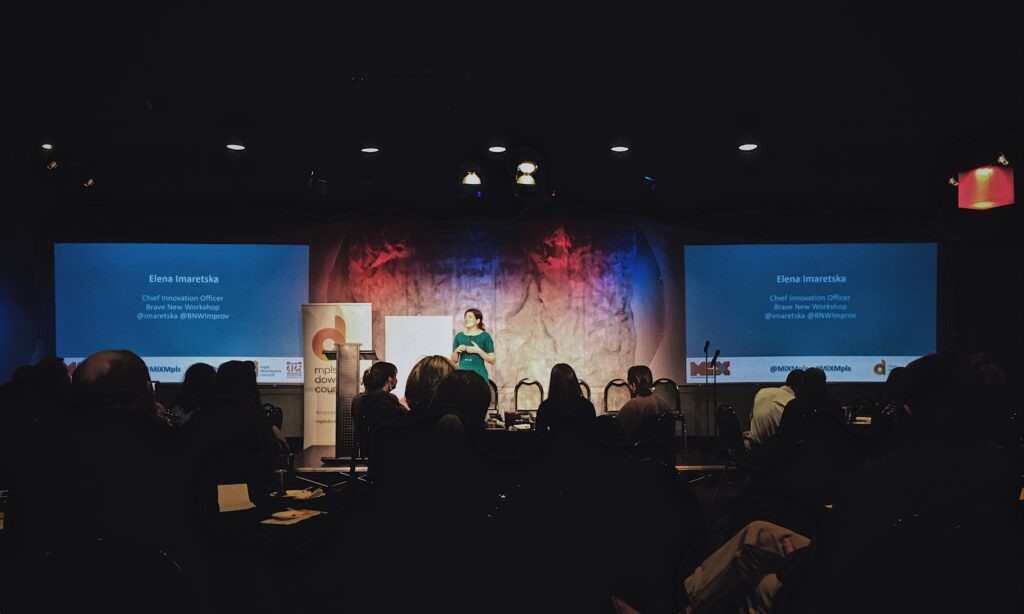 As entrepreneurs, agents of change, and creatives, it is assumed that we’re used to improvising. We pitch new ideas and work with new people all the time. This should be easy, right?

The exercise was simple: each person at the table would list five things from memory in different topic areas. The first person at our table was asked to list U.S. states. The next person, five cars. I participated in the third round, where I named five books I’d read. The titles flowed with little shame or difficulty (I picked Where the Sidewalk Ends, The Da Vinci Code, Harry Potter, 2001: A Space Odyssey, and If You Give a Mouse a Cookie—the combination of which might reveal disturbing insights about my subconscious).

As expected, listing things we already knew or had experienced was easy. But when it came to making up answers on the spot—like naming new lakes or coming up with the big bands of 2018—well, that was much harder.

It doesn’t have to be that way, though. Here are my big takeaways from MiX, and four tips for incorporating improv into the creative process.

When it came to listing things we already knew, most of us played it safe. “Our brains love patterns,” Elena told us. People asked to name states listed places they lived or visited, and the states surrounding them. Those asked to name cars either named five makes or five models—not a mix of the two. “You never hear words like sparkling, or flying” as types of cars, Elena said, even though those would be acceptable answers.

Improv—in this case, coming up with a list of unknowns—requires creativity. In life, you can’t always rely on your knowns, like the state where you live or the car that you drive, as a starting point. This exercise simply reinforced the idea that creativity is a muscle, and that it grows stronger with more use. If we don’t practice creativity, it can take longer to generate ideas. But when we’re constantly ideating (or at least open to the idea of it), the ideas will flow more freely.

Near the end of the night, each table was given an objective, a sharpie, 20 minutes, and a piece of paper. Our task? Increase access to jobs and education with 2,000 dollars. I froze. What if I say the wrong thing? What if I can’t come up with a compelling idea? Luckily, I was seated next to Ashleyn from Impact Hub MSP, who broke the ice by listing ideas of all sizes. 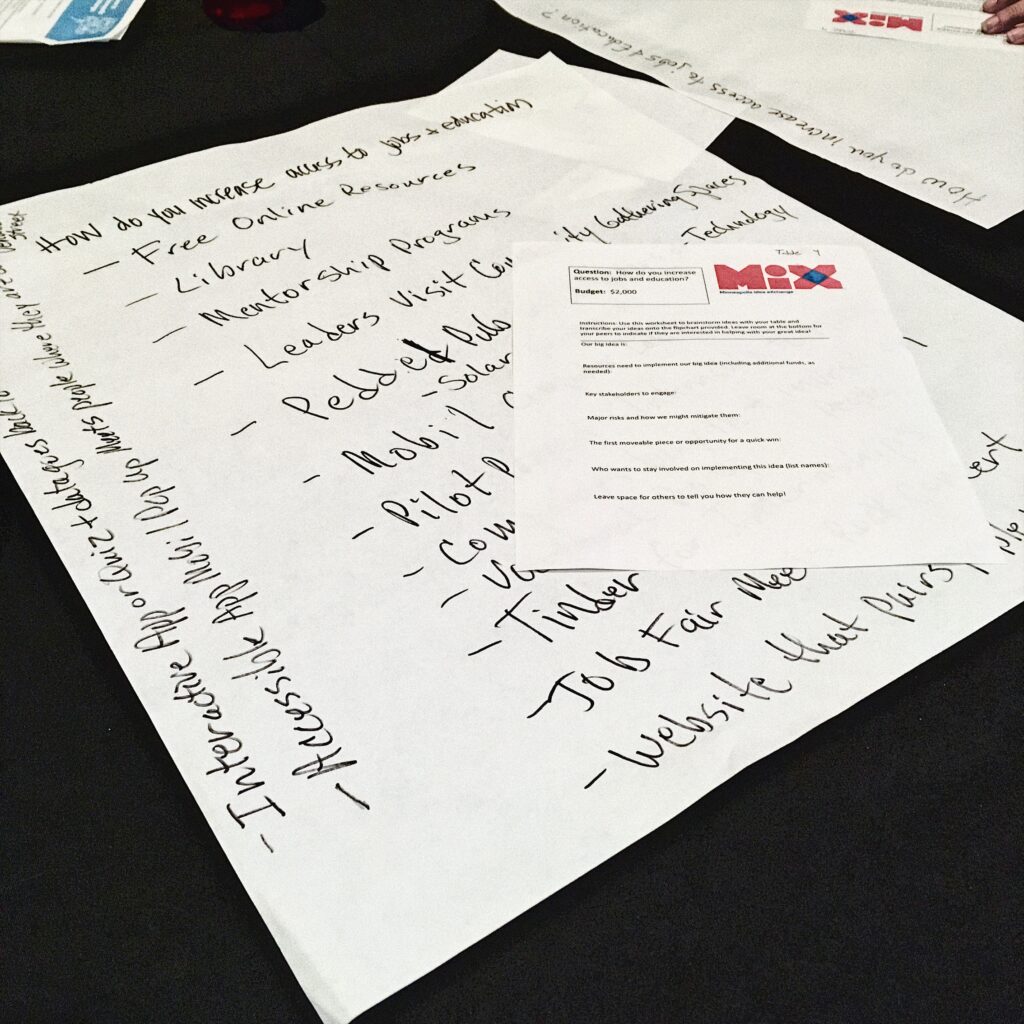 Instead of focusing on coming up with my own brilliant idea, I started to build off the ideas of others. In 20 short minutes, our table want from a blank sheet of paper to a concept brimming with all kinds of moonshot impossibilities. We called it “Pop Up Mentor Match,” and it brought together smart kiosk technology with event-based outreach a’la Rock The Vote.

When I felt paralyzed by fear, I just started talking. I knew that my teammates would back me up and build on my ideas—and they did. In the end, our concept was given to Minneapolis City Hall. Had we let fear get in the way of improvisation, we would have missed an opportunity to share a potentially big idea.

Design, at its core, is visual communication. Improv is ad-libbed communication. If you’re an introverted designer (you’re in good company), try meeting your next challenge head-on with a classic improv response: “Yes, and…”.

By saying “yes, and…” you accept the situation given to you (the yes) and build on that situation (the and). This allows the situation/scene/concept to continue and evolve, rather than boxing yourself into one line of thinking by saying no. “Yes, and…” is an open invitation to creative exploration.

In improv, perfection isn’t the expectation. Instead, the focus is on exercising the muscles of creativity to improve everyone’s chances at delivering a great performance. Want to boost your own creativity? Don’t worry about getting it right, just get it started! And create a safe place for others on your team to do the same—more voices means more ideas. More ideas mean more opportunities to create world-changing software and design.

We Can Help, Too

Have a great idea in your head? We’re happy to offer up a “yes, and…” to help bring your biggest ideas to life. Contact us at hello@softwareforgood.com