So, there is this thing about my life that is hard to explain. I have a carefully curated Pinterest board full of unicorns. Over 250 unicorns, actually.

I once worked as a developer for a boss who didn’t really understand the Internet or websites or what they were meant to do. He would regularly ask for features that were either impossibly vague or impossibly complicated. “Can you detect what the user really wants and then show them interesting and relevant wp-content?” or “I want it to engage the user.” The requests always had a hint of the possible — with 10 developers and a year to do it. But the schedule was always this week, and the team was only me.

The requests for the unnatural and impossible came so frequently that a few of us in the office gave them names: unicorns.

Around the same time, a neglected pink skoosh unicorn emerged from the mists of the corporate clutter and quickly became our office mascot. I have no idea where this thing came from or why it was even in the office, but it became our symbol of the fantastic, impossible tasks that we were constantly being asked to accomplish. It was a rallying point for the downcast team members who needed a chance to commiserate.

In addition to software development, part of my job was to understand and make recommendations around social media services. Pinterest had just been formed, and I had been resisting creating an account. I really wasn’t interested in collecting pictures of wedding dresses or the latest updo hairstyles.

The day came, however, when I knew I’d soon have to speak intelligently about Pinterest. I buckled down and created an account. But what would my first board highlight? I could collect pictures of motorcycles or watches (early trends for guys on Pinterest), but it didn’t feel right. I needed to collect pictures of something that fit the platform.

And then it clicked. Unicorns! I would collect pictures of Unicorns. It fit in perfectly.

Part 3: Finding Corners of the Internet

After a few pictures were posted, I felt confident that I could speak about how Pinterest worked, its advantages and disadvantages. But the unicorns! Do you know how many unicorn pictures there are on the Internet? I had unwittingly tapped into an artery of the Internet’s zeitgeist.

My curiosity was piqued, and I started doing random searches. For example, someone had talked about President Obama one day, and I wondered. Are pictures of Obama riding a unicorn on the Internet? Yep. There are. Many. With rainbows.

I went and saw the movie Prometheus one afternoon. Wonder if there are any Prometheus unicorn pictures? Yep. There are. 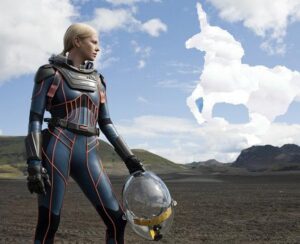 This activity repeated and before long, I had amassed quite a collection.

My collection isn’t growing as fast anymore, but my Pinterest board lives on. A few weeks back, Cory Preus hooked up the Pinterest board to our office robot. Now, whenever anyone says “magic” in our office chat room, the robot grabs a random unicorn picture from the board and posts it for everyone to see.

While my new work often challenges and stretches me to learn new things, I rarely feel the same need to produce a work of mythology from the mists of time. Our magic consists of great teamwork and achievable goals. Difficult to pin, but a much rarer thing.