Level Up Your Pattern Recognition 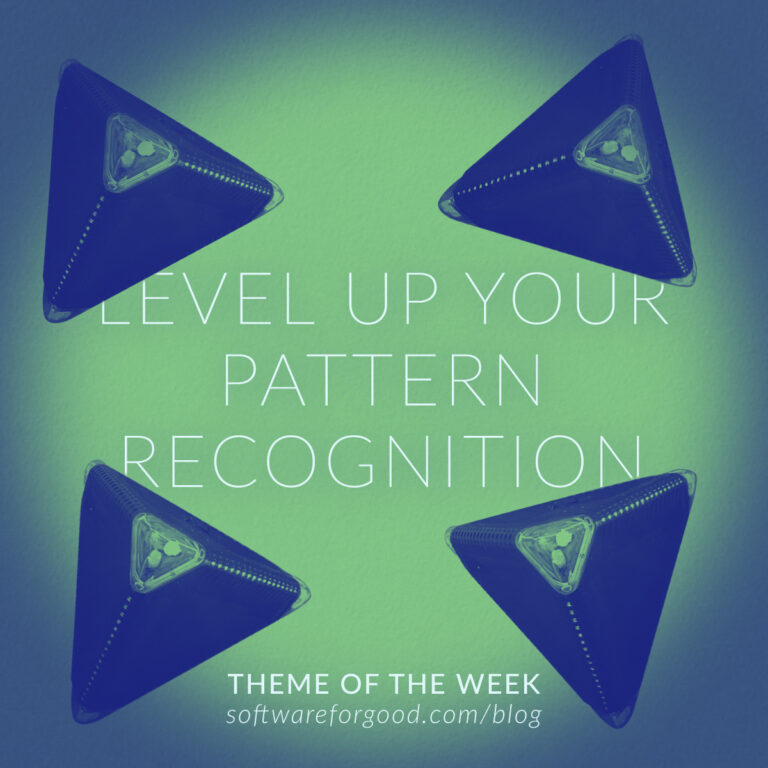 This is a game called Luminations. It was first made in 1989. There are five levels, and your goal is to recognize the internal pattern and flip the device over until all four corners are solid red. Easy enough.

On Level 1, only one color changes – the one brought up — and it cycles through a short, simple pattern of green, off, yellow, flashing green, and then red.

On Level 2, the color cycle is different and two lights change — the one brought up and the one that is brought down.

Level 3 has a twist: Your previous move affects how the lights change the behavior in the current move.

When you get to Level 5 (only accessible after completing Level 4), each move affects the next three moves into the future. The color sequence is nine colors long. Worse, there are two solid greens and two flashing yellows in the sequence so you can’t always be sure if the lights are matching or not.

This week, my challenge to you is to level up your pattern recognition game. Spend time observing situations and interactions. Look for patterns. Perhaps you solve every logic challenge the same way. Perhaps your response to interactions with other people is consistent. What might the influencers be that could reasonably predict an outcome?

As a quick example, I was listening to the Not So Standard Deviations podcast this week. They commented briefly about the struggle to do a demographic analysis that was not easily reducible to the poverty map — a map of income inequality for a particular geography. It was just a side comment, but this struck me as odd. They were trying to find complex patterns through data analysis while ignoring the elephant in the room. The pattern may be that poverty in and of itself might just be the one and only problem we need to solve. And recognizing that we don’t focus on poverty even when we can call it out by name, is also an interesting pattern.

However, this week the focus is not to change any particular pattern. Wether it is a good or bad pattern, I simply want you to recognize that there is a pattern. Understand the situation and follow the logic. Think beyond simple cause & effect patterns. Think about probability, influence, and impact. If today you were to say “x” to person y, how might that manifest itself next week when you follow up by saying “z”? Is there a pattern? Can you create a situation next week that you could predict this week?

With Luminations, Level 5 is only winnable when you can think ahead three moves. And that’s only after you’ve recognized the sequence and the pattern. Life is far more complex. Start with what you can observe and look for the patterns as they present themselves. You may make wrong conclusions at the start — like that deceptive second solid green — but with careful observation I bet you’ll start to see the patterns you didn’t know had been there all along.