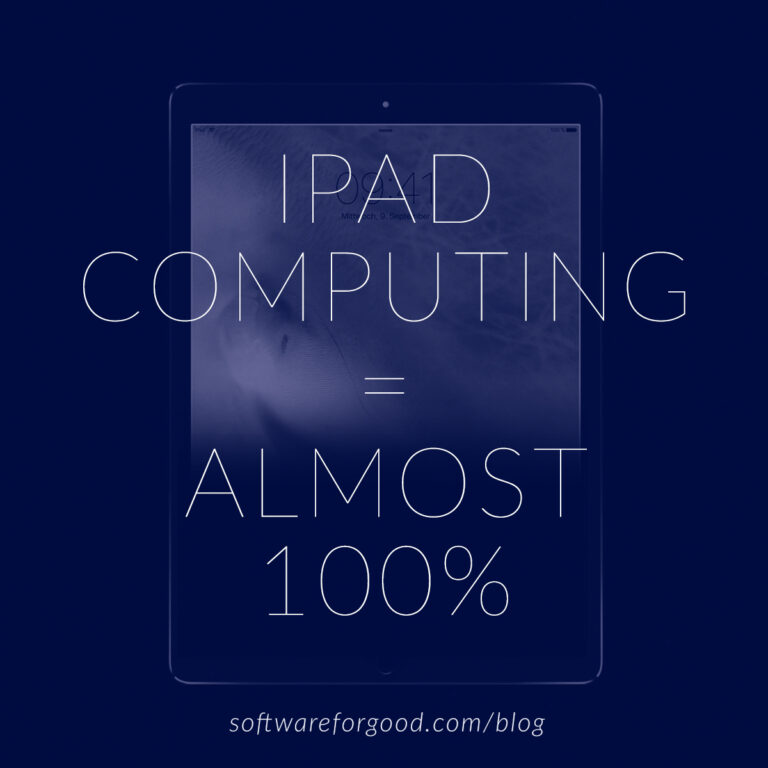 Yes, I’ve switched my main computer over to an iPad.
No, it doesn’t work for 100% of my computing needs.
But. It’s the future. It’s small. It’s amazing. And it’s teaching me to think differently. Here’s how.

Why I Made the Jump

First, why did I choose to move from a MacBook to an iPad? There were a lot of little reasons, but simple curiosity was the biggest one. Could I make it work? Where would I encounter challenges? Would any of them be show-stoppers? And what would I learn about my computing habits?

Add to that a timing issue at Software for Good: my MacBook Air’s lease was up. It was time to figure out new hardware one way or another, and while the new MacBook Pros with their fancy new TouchBar looked nice, 1/3 the price for an iPad and a bit of adventure was calling.

Plus, I believe the future of computing will focus more on tablets than traditional laptops, and I wanted to get a head start on figuring that out. This was further underscored by Apple’s lackluster delivery of new hardware in 2016. And of course Apple’s business is significantly weighted toward the iPhone now, so we can expect them to invest heavily in the iOS ecosystem. It’s a good bet that any cool new features will start in iOS first.

So what did I end up with? I’m running the 9.7-inch iPad Pro. It has 128GB, and I opted to go without the cellular since it is easy enough to tether to my iPhone on the rare occurrence that wifi is not available. I purchased an Apple Pencil for experimenting, but the Logitech CREATE Backlit Keyboard Case was essential for making this a true productivity focused machine.

So much software! I won’t list them all out here, but a few key pieces that I use heavily every day.

OmniFocus: For keeping track of my own to-dos and followups, and progressing personal goals
Asana: For keeping track of my team and project to-dos
Slack: Communicating with coworkers and clients
Notes: I type all of my notes from every meeting. Searchable, flexible. This is an amazingly powerful bundled app.
Workflow: This holds a lot of promise in automating some pretty neat things. I have a couple ways I use it, but could use it a lot more.
Screens: This is my fallback. It lets me remote into a traditional computer (from my iPad) when the iPad native apps just don’t cut it.
Google Docs & Sheets: Why pass files around when they can just live in the cloud?
Working Copy: Editing code, saving contracts, and interfacing with GitHub

So there are the obvious benefits. The 9.7 iPad Pro is smaller and lighter than most laptops—even when you include the pencil and keyboard case. It feels less intrusive in meetings. Major portability win here. And the battery life is stellar, though I still haven’t gotten used to not plugging it in when I’m at my desk.

But what else works well?

Native Apps
Web apps work fine, but I look for native apps first. Only downside: if the native app isn’t as feature-complete as the desktop counterpart, I get frustrated. (Harvest app for time tracking, I’m looking at you.)

Sharing using the built-in share sheet has been a slow amaze. Pushing a web link into a Slack channel, sending a file from the Dropbox app, or sending a team email with a templated status report I typed up in the Notes app—this all feels so much more natural with the share sheet than the drag/drop or copy/paste world of macOS. It isn’t perfect yet, but this new way to move information around and connect apps is awesome.

Workflow is another nifty app. One fun script I wrote lets me send a whole set of private messages to everyone in my Slack team, all at once.

I absolutely love the full-screen apps with the occasional split view. It helps me focus on the task in front of me, and see it through to the end. I tried to run all full-screen apps on macOS, and it just never quite worked. Lots of swiping to find the app I needed, and distractions kept popping up. I found myself dropping back into the windowed mode—which I hate—because I was constantly shuffling windows around to find the perfect placement, only to have it entirely upset as soon as I plugged an external monitor in. (Yes, I tried those save-the-position-of-the-windows apps. None of them work well.)

Intentionality
The lack of distractions in iPad computing truly surprised me. I find that when I sit down at my iPad, I have to think: Why am I here? What do I want to work on? This level of intentionality is something I never worried about on macOS. You knew what to work on next because when you closed one app, there was always another one right underneath waiting for your attention. It was more like whack-a-mole than intentional and methodically planned work. With the iPad, I first have to decide what to work on, then do it.

Before I could fully let go of having my own macOS computer, I needed to track what didn’t work well and plan for those limitations. I created a list, which is long and mostly filled with weird, esoteric issues. They mostly fall into the “annoyances” bucket and not the “show-stopper” bucket. It’s a decidedly strange list of limitations, and not worth sharing here.

However, I’ve found one shortcoming particularly difficult to manage: video conferencing. This is the biggest issue I’ve had to date with the iPad.

Yes, I can video conference from the iPad. WebEx, Google Hangouts, Zoom, and FaceTime all work well. But when you’re running a meeting and need to do something else at the same time? Total fail.

All video sharing stops as soon as I switch to a different app—for example, switching over to Notes to capture meeting highlights, or quickly looking something up in the browser. Things one expects to do when on a video call.

The only exception is FaceTime, which works beautifully and does the picture-in-picture thing fabulously. Unfortunately, it limits you to only one other person in the call at a time.

I can’t use any external cameras, monitors, microphones, or speakers. (Well, sort of. If I had a Bluetooth speaker/microphone, and an Apple TV to AirPlay-mirror to, then most of this would be okay.) But the conference room I use has USB-based and HDMI-based equipment. And if you point the iPad camera at the room to get everyone in the picture it gets to become a pretty awkward angle to use the iPad for anything else. Which wouldn’t work anyway (see previous point).**

And sharing your screen through a video conference is not possible. At all. Under any circumstances.

I have found a small workaround for some of this: a desktop tripod stand that makes my iPhone a decent video-conferencing hub. This doesn’t solve all of the problems, but it does allow me to video conference with one device while taking notes on the other.

**I just learned that the Lightning to USB 3 Camera Adapter and the Lightning Digital AV Adapter could solve both the USB-based microphone and HDMI-based TV problems, though not at the same time. Clearly I need to research this problem a bit more.

Is it worth it?

Yes. Absolutely. I’m thrilled to see what is possible and to be forced to think about old problems in new ways. There have, of course, been a few times where I was under pressure for a faster-than-normal turn-around and I didn’t appreciate the learning opportunity in front of me. But most days I find the iPad has rejuvenated my love of solving problems with computers. It’s interesting and fun, and feels more efficient as I learn new ways of working.

Would this be good for everyone? No, not today. You need to look closely at the jobs you ask your computer to perform, and then see if iOS can work. In my position, 95% of tasks can easily be done on the iPad, and I’ve found adequate work arounds for the remaining 5%.

If you spend your days in something like Xcode or a desktop-only type of app, it’s not the right time for you to make the switch. Hang tight, though. I have confidence that the list of tasks you can’t do on an iPad is going to get smaller and smaller as the years roll on.