At first I thought the Watch was set up to do too much. It felt unfocused and out of touch with what people want. Sure, the fitness-tracking is spot-on. But the photo app is a disaster. The home screen? Virtually un-navigatable. Reading email on it is a joke, as scarcely more than a dozen words fit on the screen at a time. There just didn’t seem to be a clear distinction between the watch and a phone. The watch does too much.

But after listening to a recent episode of The Talk Show with John Gruber and guest Ben Thompson, I started to think about it in a broader sense. I think their vision is too small. And I think my vision of the Watch was too small, too. Way too small.

If I can take a moment to sum up John and Ben’s current perspective, it goes something like this: 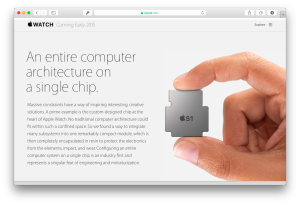 That new chip looks like it could be easily removed
and replaced by subsequent chip generations.

Apple has this wonderful trait of releasing a product and iterating every year. Each new release is a nice update, but not one that is revolutionary. This year’s iPhone 6 hardware has a bigger screen. It’s faster, thinner, and has a nicer camera. It has Apple Pay. But that’s sorta it.

And when you look at the original iPhone — no 3G, slow, poor battery life, no 3rd party apps, limited to AT&T — you see how far the iPhone has come. I think the Watch is like this. The model we see next year is just the tip of the iceberg.

I think John and Ben are right. The watch is its own platform. High-end models could be very expensive (though my guess is closer to $3,000 or $4,000). I expect it will have swappable components to keep it relevant for a long time.

Your Gateway to Screens Everywhere

I keep thinking about what this watch could be in 3-5 years. Apple framed the watch as “our most personal device yet” over and over in the keynote. But I feel like the current set of features does not quite warrant the enthusiasm they were putting behind the Most Personal Device claim. To add substance to that claim, the only thing I could really think of was: data. My data. My files, my emails, my messages, my photos, my online passwords … all of them together is what I would call “Most Personal.” And the watch doesn’t do that yet, or at least certainly not well on that tiny screen. But what if it did? What if the Watch wasn’t the destination and collector of your personal information, but the source of it? 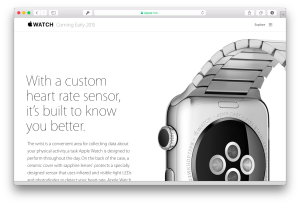 What if this high-tech personal device becomes your gateway into all computing? Certainly, there’s the Apple Pay angle that unlocks your ability to pay at a cashier. That’s cool. But what if this device unlocks every computer you come close to with your personal data stored locally? Your work laptop. Your home computer. Your shared family iPad. Certainly something with that sort of access would need to be highly personal and highly secure.

We keep hearing about this elusive Apple TV. What if it’s not a TV at all, but a dumb screen? A new computer screen, powered by your Watch? Buy an Apple TV and keyboard for each room in your house. When you walk up to it with your watch on your wrist, you are immediately granted access to all of your files, all of your emails. Anything not stored in the cloud can be shared automatically from the secure enclave on your wrist. iPads evolve into dumb screens activated by the presence of your watch.

At this point, Continuity would be in full force. Instead of doing simple handoffs between your iPhone and Yosemite, Continuity on your watch would power the phone screens, the tablet screens, the laptop screens, and any larger “Apple TV” screens you have in your house. Whatever screen you pick up or approach automatically show you your data, your apps, everything.

Security would be ensured through a biometric authentication from you, on your wrist. TouchID, or one of the new sensors on the underside of the watch pushed up against your skin.

One thing I’ve wondered about is the dedicated Contacts button on the watch. Seems plausible that Apple would view your address book as important enough to demand its own hardware button, but it doesn’t feel right. Looking back on past Apple products, Contacts were never important enough to demand a dedicated hardware button on the iPhone. And that seems like a glaring oversight if we are to believe Contacts now commands hardware-button-level importance. I mean, the original iPhone was marketed as not just a “Revolutionary Mobile Phone,” but an “Internet Communication Device.” No button. This is exacerbated by the fact that the watch seems kinda awkward for communications. You have to use Siri to reply to text messages. Phone calls are by speaker phone or bluetooth headset (are we going to wear those all day too?). Those animated emojis are weird, and sending my heartbeat via Digital Touch? Yeah. I don’t think I’m ever going to send that to my boss.

The button is for Continuity. I think the Contacts button is going to evolve into a tool for initiating a Continuity session. It’ll work something like this: Press the button on your Watch, and the dumb-screen tablet you just picked up flashes to life with the email you were writing on your laptop. Maybe there’s an authentication needed for new devices: tap the TouchID sensor on your watch and you’re instantly logged in. If you have multiple dumb screens within reach, say a tablet and a laptop, just use the Digital Crown to select the one you want to use. Or maybe cute icons of your iPad, MacBook Air, and various Apple TVs will pop up. 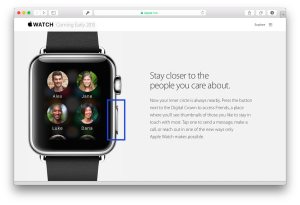 Long-term, I think the Contact button will allow you to initiate a
Continuity session with the nearest screen.

The Future of Computing

What do you think? Am I right? Am I wrong? Is this too far-fetched? To me, the vision Apple presented for Watch doesn’t seem to match the enthusiasm in their marketing or the keynote. You know they renovated an entire building for this announcement, right? I suspect they’re holding back a few major features of the Watch, and that whatever is missing will have a significant impact on how we interact with computers in the future.

Regardless of what happens in 2015, you can be sure that Software for Good will be following it closely. Though we won’t be launching a WatchKit lab or incubator, you can be sure we’ll be talking regularly at iOS.mn about the watch, the WatchKit, and everything it means. Join us! iOS.mn meetups take place monthly here at SfG. You can find more information at iOS.mn.

With a strong work ethic and shared passion for Apple technologies, the team here can’t wait to dig in and learn as much as possible. Apple is expected to make the WatchKit available early next year, and when they do, watch (pun intended!) this space for more analysis and our experience working with the new and growing platform. 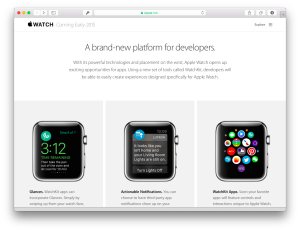 We’re eagerly waiting for the WatchKit to become
available so we can dig in and build our first Watch app!

What would you like to see built for the Watch? We have a team of seasoned developers working on large and small projects for the web, iOS, and Android. We’d love to talk about your ideas. Drop me an email at peter@softwareforgood.com.